Inter Allies out of the FA cup after defeat to Legon Cities
Inter Allies are out of the 2019/20 MTN FA Cup after losing the round of 64 encounter to Legon Cities on Monday at the Accra Sports Stadium. ‬ ‪The fringe players got the opportunity to enjoy some playing time as the technical team made 9

Inter Allies warns Premier League Clubs over Adebayor
Inter Allies have declared that they are not in any position of selling their marksman Victorien Adebayor warning clubs to desist from poaching of their Nigerian talent. Adebayor has been on a hot scoring streak in the ongoing 2019/20 Ghana

Kotoko, Aduana suffer MTN FA Cup upsets
Asante Kotoko have been eliminated from this season’s MTN FA Cup after losing 1-2 to Asokwa Deportivo. Second tier side Asokwa Deportivo shocked the 2017 champions to book a place in the Round of 32. Other matches saw Hearts of Oak easing into

Tyson Fury will be worried by first-fight knockdowns - Deontay Wilder

Deontay Wilder believes Tyson Fury is scared and will be having sleepless nights before their world heavyweight title rematch later this month.

The pair fight in Las Vegas on 22 February for Wilder's WBC championship.

Their bout in December 2018 ended in a controversial draw with the American knocking Fury down twice, although the Englishman also thought he had won.

"When you get knocked down by someone, you never forget it or how they did it," said 34-year-old Wilder.

Speaking on a media conference call from the United States on Tuesday, he added: "Deep down I feel he's nervous, very nervous from what happened the first time.

"When you go in there for a second time it has to be stressful and you definitely can't sleep at night.

"He's worried and I don't think his confidence is that high because of the state I left him in before.

"I gave this man concussion and it will happen again because the head is not meant to be hit, especially by the power of Deontay Wilder, so he has a lot to think about."

Both men are unbeaten with their draw in Los Angeles 14 months ago being the only time they have not won a professional fight. 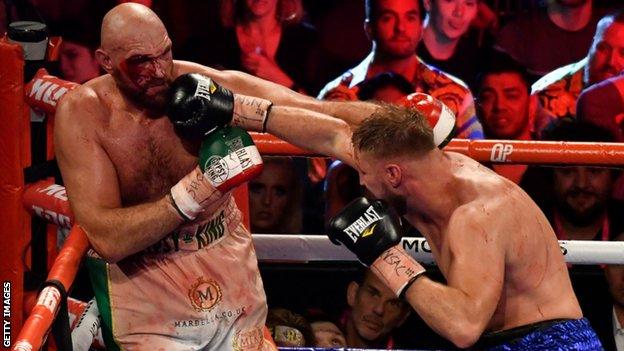 Fury, 31, last fought against Sweden's Otto Wallin and, despite sustaining a bad cut close to his eye early on, won via a unanimous points decision.


However, since then Fury has changed trainers, moving from Ben Davison to Javan 'Sugar' Hill Steward, the nephew of the late Emmanuel Steward, who trained Lennox Lewis and Wladimir Klitschko.

"Fury can say he beat me by a wide margin but he doesn't believe that - that's why he wants to change so many things," added Wilder. "If he believed he won he wouldn't have changed much - the next thing he is going to do is go to a spiritual advisor.

"Wallin had a game plan and executed it. That fight should've been stopped with a cut so deep and I look forward to re-cutting that eye.

"Once it's open again and the blood is in his face I'm coming in for the kill. I don't play around.

"I knocked him out the first time but I didn't get it and I'm going to knock him out again."

Wilder won the WBC heavyweight championship in January 2015 and has successfully defended the belt on 10 occasions - the same number of defences as legendary heavyweight Muhammad Ali managed between 1974 and 1978.

The other major heavyweight titles - the IBF, WBA and WBO - are held by Britain's Anthony Joshua after he regained the belts in December by winning a rematch against Mexican-American Andy Ruiz, a fighter he lost to six months earlier.

But Wilder, who has 42 wins and one draw as a professional and never fought Joshua, said: "I'm not worried about that coward, he barely got his titles back, never mind trying to step in the ring with the king.

"He never wanted to fight me. He has been out of the picture and no-one is talking about him anymore.

"The heavyweight division is on fire and it's my job to keep it that way. It's a tie-break with Muhammad Ali and I'm looking forward to setting some history on February 22nd.

"Fury has pillow-esque fists. After the first fight I didn't feel sore. I took all of his punches. He's just a big man who can move around the ring, his power is not there.

"The Gypsy King is going to be floored and he's definitely not getting up." 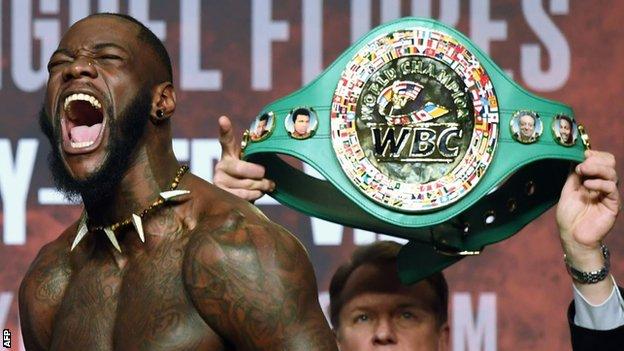