Inter Allies out of the FA cup after defeat to Legon Cities
Inter Allies are out of the 2019/20 MTN FA Cup after losing the round of 64 encounter to Legon Cities on Monday at the Accra Sports Stadium. ‬ ‪The fringe players got the opportunity to enjoy some playing time as the technical team made 9

Inter Allies warns Premier League Clubs over Adebayor
Inter Allies have declared that they are not in any position of selling their marksman Victorien Adebayor warning clubs to desist from poaching of their Nigerian talent. Adebayor has been on a hot scoring streak in the ongoing 2019/20 Ghana

Kotoko, Aduana suffer MTN FA Cup upsets
Asante Kotoko have been eliminated from this season’s MTN FA Cup after losing 1-2 to Asokwa Deportivo. Second tier side Asokwa Deportivo shocked the 2017 champions to book a place in the Round of 32. Other matches saw Hearts of Oak easing into

Asante Kotoko returned to winning ways in the Ghana Premier League with a narrow 1-0 win over Dreams FC in Dawu.

The Porcupine Warriors headed to Accra for a double header Premier League away fixtures at WAFA and Dreams FC.

Kotoko managed a point at Sogakope on Wednesday on matchday-eight after a goalless draw against WAFA and then headed to Dawu on Sunday where they eked a goal against Dreams FC on day-nine.

It was a tough afternoon for Kotoko at the Theatre of Dreams but they managed to snatch a vital away win.

Dreams were reduced to 10-men in the 36th minute of the game when Amadu Dantani received a second yellow card for a foul.

Dreams held their lines very well and managed to go into half time without conceding.

The second half started in fine fashion for Kotoko who piled pressure on their opponent, it finally paid off in the 67th minute after Abdul Bashiru turned the ball into his own net.

That made it 1-0 to the porcupines who held on to record a victory.

Aduana Stars Vs Hearts of Oak

Hearts of Oak put up a resilient performance to secure a point in their Ghana Premier League match against Aduana Stars in Dormaa.

For the home team striker Bright Adjei returned to the start list after missing two games through injury while defender Musah Amevor replaced Farouk Adams who was suspended for Hearts Of Oak game after been red carded on match day 8 against Ebusua Dwarfs.

Hearts Of Oak managed to hit the woodwork twice as both Kofi Kordzie and Joseph Esso had glorious opportunities to score.

Yahaya Mohammed had opportunities to take his trademark freekicks but his thunderbolts were all saved by goalkeeper Richard Attah.

Referee George Vormawor brought proceedings to an end after 90mins with AduanaStars defender Caleb Amankwah being adjourned NASCO player of the Match for his stand out performance at the heart of the home team's defence. 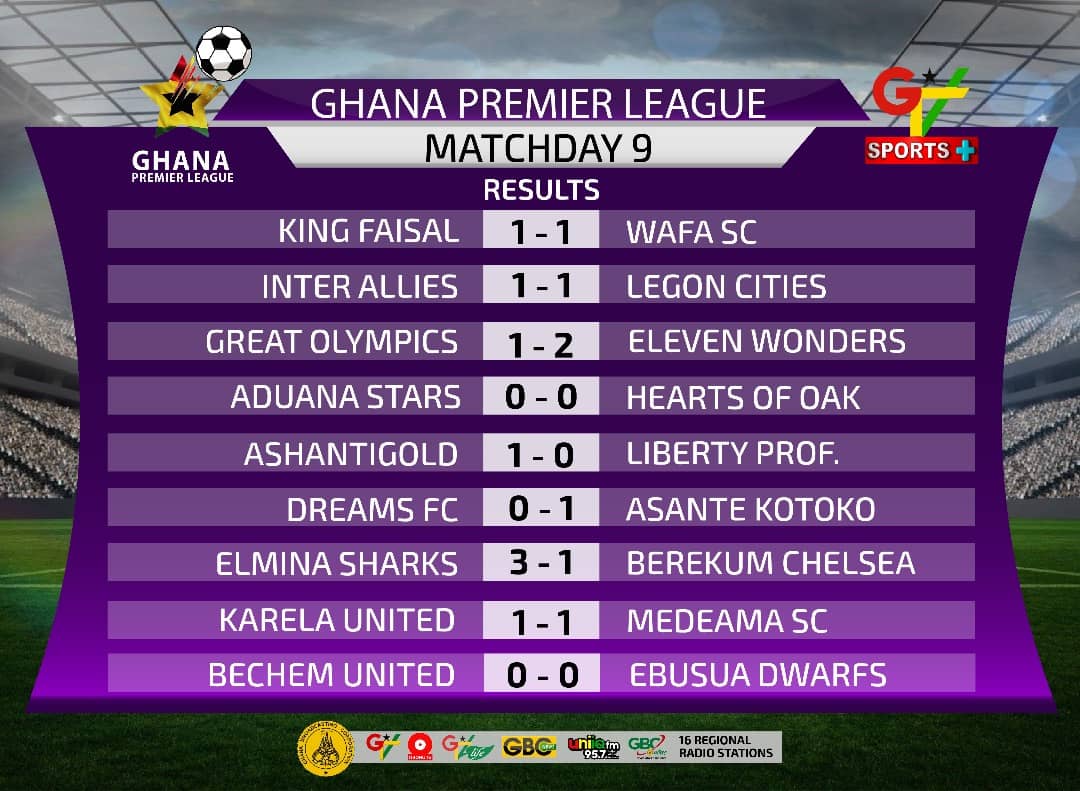 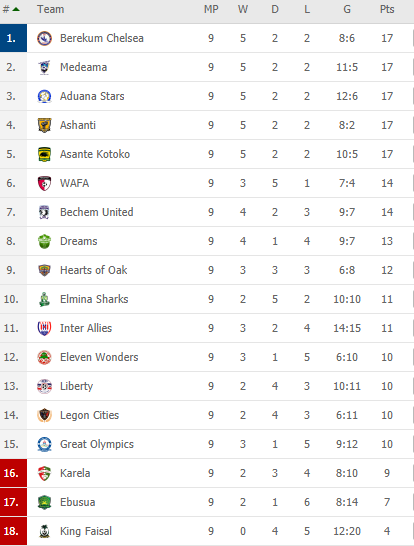